Riverbed today launched a beta of a unified observability platform it will make available under the Alluvio by Riverbed brand name.

The goal is to provide an open observability platform that can not only aggregate data collected from both Riverbed and third-party offerings but also identify the best ways to resolve an IT issue, added Hansen.

Scheduled to be generally available later this year, the Alluvio by Riverbed observability platform will differ from existing observability platforms in that it will enable IT teams to not just identify the root cause of an IT issue, but also note which processes should be employed to resolve it, he said.

With this launch, Riverbed is attempting to reposition itself. Previously, the company offered network and application performance management platforms alongside a wide range of network software and hardware. Each of those offerings is now a source of data that can be fed into the Alluvio by Riverbed observability platform, noted Hansen. 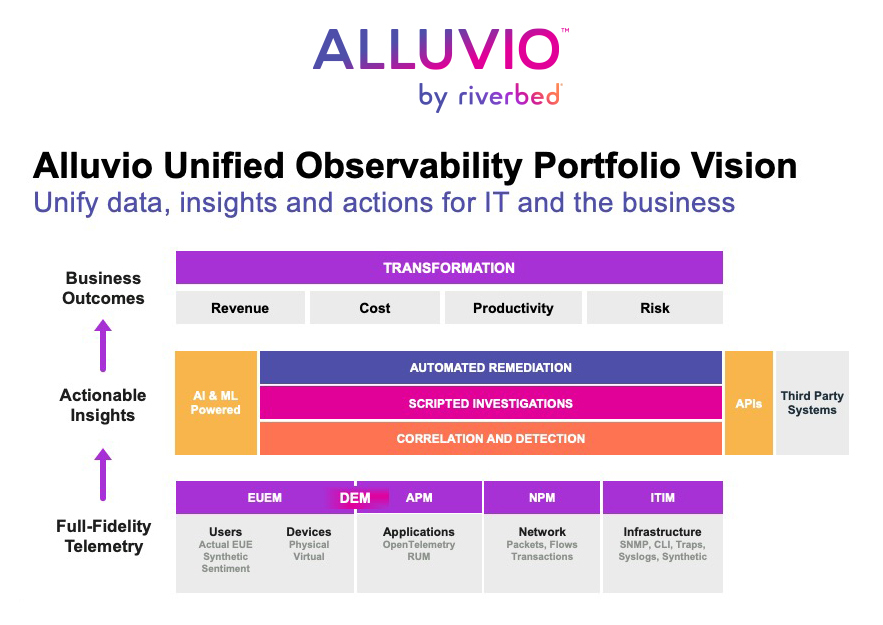 Observability, of course, has always been a core tenet of any DevOps best practice. Achieving that goal, however, has proven to be elusive. Most of the IT monitoring tools used today are designed to track a set of pre-defined metrics. Whenever there is an issue, IT teams typically convene in a war room where they try to uncover the root cause of, for example, a performance issue by comparing reports and the various dashboards generated by monitoring tools. It can take weeks to discover an issue that often only takes a few minutes to fix once the source of the problem is identified.

In contrast, platforms observability promise to reduce the time required to discover IT issues by aggregating all the data generated by the IT environment within a single platform that correlates events and makes it easier to identify anomalous behavior. Armed with those insights, it becomes a lot simpler for IT teams to launch queries that enable them to resolve issues faster.

Those insights are also decisions being used to drive business as organizations become more dependent on software to drive digital business transformation initiatives. However, a recent survey conducted by Riverbed finds three-quarters of business decision-makers (75%) said their organizations struggle to glean actionable insights from data generated by their technology infrastructure.

The challenge IT teams inevitably encounter is they don’t always know the right questions to ask, which is an issue that can be addressed by machine learning algorithms capable of identifying anomalies indicative of an IT issue that needs to be resolved.